Losing track of time, tardy, belated, untimely – whatever you want to call it. You’re still late!  Excuses are not needed, your reasons for running late are very good reasons to adore you! Keep reading to find out the 9 reasons to adore someone who is always running late. 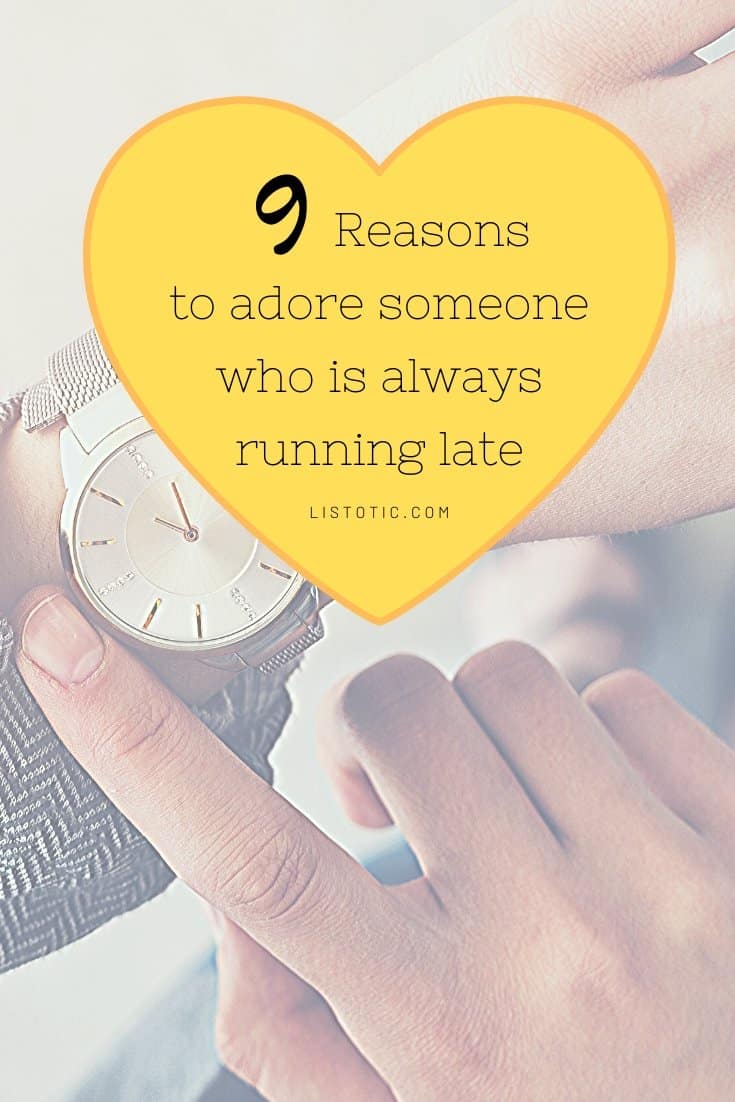 Please note: for the context of this article I am speaking about someone who is accidentally late. Due to losing track of time.

This article is not forgiving someone who is consciously, strategically or purposely choosing to be late. That is just rude.

Are You Running on a Different Clock?

I’m so “good” at consistently being late, that friends, family & co-workers have now accepted that I run on a completely different clock than the rest of the world. Except for my husband, I think he still has hope I will change my ways.  I have perfected the art of “high functioning tardiness”. Yes, I just made that term up – feel free to use it. Articles such as “Why Chronically Late People Are Actually More Successful” and “People Who Are Always Late Live Longer” have enabled me to look at my obsessive tardiness as a strength rather than an utter-disappointment to society.

I would like to reach out to the scientific community to do some more genetic research on people who run late. I do believe this is a genetic trait I have inherited. And, I’m sure the pharmaceutical companies could come up with a “cure” to my… still got to brush my teeth, the family is loaded in the car, I can’t find my keys now… but let me water the plants real quick” … functional disorder.

Until scientists find a way to combat my genetic tendencies towards “running late” I have found scientific findings, quotes, and reasons to adore this common human flaw of running late. Just keep reading below for the excuses oops; I mean explanations.

9 reasons to adore someone who is always running late

This might not make much sense because running late seems to be associated with disorganization. But many people who are running late just have a hard time not trying to get just one more thing accomplished before they leave the house or workplace.

“does running late count as exercise?”

2. They are typically giving and caring people.

Wrapping a gift, pulling warm cookies out of the oven or singing a song to a toddler while they tie their shoes. Yes sometimes being late is downright rude. BUT sometimes when there is no hurt being caused the act of someone being late is actually because they are spending some extra time just to GIVE to another.

Someone with High functioning tardiness says: “On my way soon!”

Translation: “I still have 10 more things to do before I leave the house. I’ll be at least 15 minutes later then I planned.”

3. They are careful & courteous.

It takes time to be careful and courteous when you are making your way from one location to another. When it comes to driving I have no personal comment about this one as I tend to drive a bit over the speed limit. But I will say that any dents in my vehicle have been made while going a snail's pace and I will blame them on the fact that I drive a large boxy shaped minivan that doesn’t get around like my sports car I owned before kids. Being careful and courteous can slow a person down.

For example, I have taught my son to hold the door open for other people and this has backfired on several instances when we needed to get going.

We would be some of the first to exit a public event, school or sports game and he is holding the door for crowd who is also leaving the same event – since I have taught him it is polite to hold the door he has a hard time letting the door swing shut on the next exiting group. Depending on the size of the event it can take serval minutes and some large groups of people to exit before I can convince him to let go of the door and walk with me to the vehicle.

Of course, all the people my son held the door for have already made it to their vehicles and we are sure to be stuck in traffic behind them for several more minutes. Resulting in a 10min or more late arrival at the next scheduled commitment.

Really – They Aren't Trying to Be Rude

It’s understandable to argue keeping others waiting from your tardiness arrogant and rude. The complete opposite of courteous.  This article from NBC news gives some different perspectives on the rudeness of being late.

“You're probably not trying to be rude but people tend to see it that way.”

It truly all depends on the people and the location you are running late for. You should never “strive” to be late, that would most certainly be rude.

More often than not I’m running behind due to a creative project or I am deeply involved in and I have lost track of time. Others that I know who tend to run late are also creative.

Example: I often have glue, scraps of ribbon, paper, and homemade greeting card supplies scattered on my kitchen counter when we return home from a family birthday party that we were fashionably 10 minutes late for.

The reason being I wanted our gift and card to look extra special and I was working on the gift instead of getting myself ready.

5. They are discreet and humble.

Have you ever wondered about someone “why are they always running late!” Maybe there is a reason you don’t know… Just maybe they have a really good reason but they haven’t told you about it because they don’t want to seem like they are selfish, needy, or an attention seeker.

Who says I can’t bake a delicious confetti-filled birthday cake, put the finishing touches on a homemade piñata, clean the entire house and host the county’s best 5-year old’s birthday party in less than 4 hours! Just watch me – oh but tell the guests I’ll be a little late because I need to take a quick shower.

Being optimistic has been directly related to living a happier healthier life according to a study from Harvard University.

7. They are passionate about their interests.

When someone is passionate about something they aren’t going cut corners and their mind is always going to be turning on subjects they care about. Which means they are going to eventually become very successful in their endeavors.

“According to a study from Harvard University, People who usually run late also tend to be happier and live longer”- creative healthy family 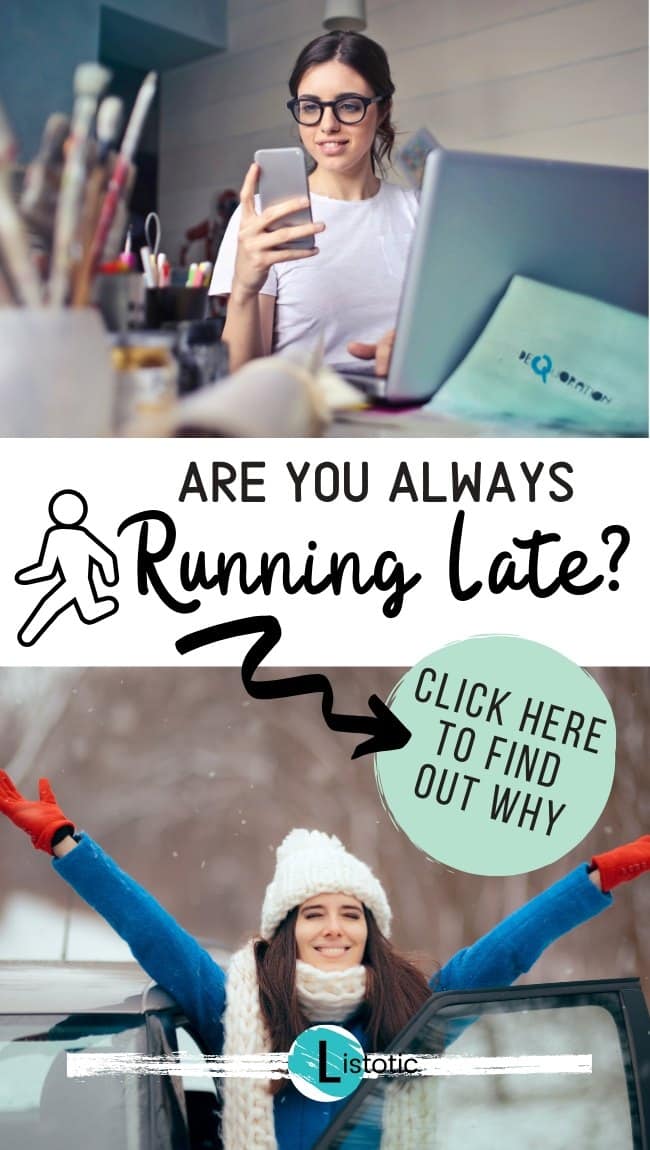 Wait a few years to see the true results but you’re used to waiting on that person that by now.

Someone who is always running late doesn’t seem to be too rigid in their mindset. So this must mean there are somewhat of a free spirit. If someone is worth waiting on all the time they must be a good time to hang out with. Otherwise, why would you always hang around waiting for them to get there? Just saying.

If you have a significant other always running late, could it be that part of your frustration is because you would like to spend more time with that person? But their ability to get ready for a date on time is impossible and it cuts down the time you have together. Check out this post: easy stay at home date night ideas. Maybe a date night without the need to get all gussied up is the perfect solution!

Fun + Free-Spirited = Worth the wait

In a RISE podcast by Rachel Hollis, her guest shares the goal to become a better procrastinator with podcast listeners. It sounds like a backward goal right? But she talks about the book by “Originals” by Adam Grant. Leaving a task unfinished stays active in our minds to mull over and think it more. The biggest creative insight comes from the process of thinking it over, marinate the idea and let it sit on our plates for a while so we can think and ponder something.

So, to all those (like me) who are always running late… Try harder to be on time. Some people adore you and they are waiting for you right now.

And, To all those waiting on someone who is always running late… Try harder to be patient. You know deep down you adore that person despite their tardiness.

The reasons why someone is always running late might tell you more about why you love the person they are.

I decided that some of you might need to print these reasons out for friends and family.  So I’ve created a free printable for you to use as needed. 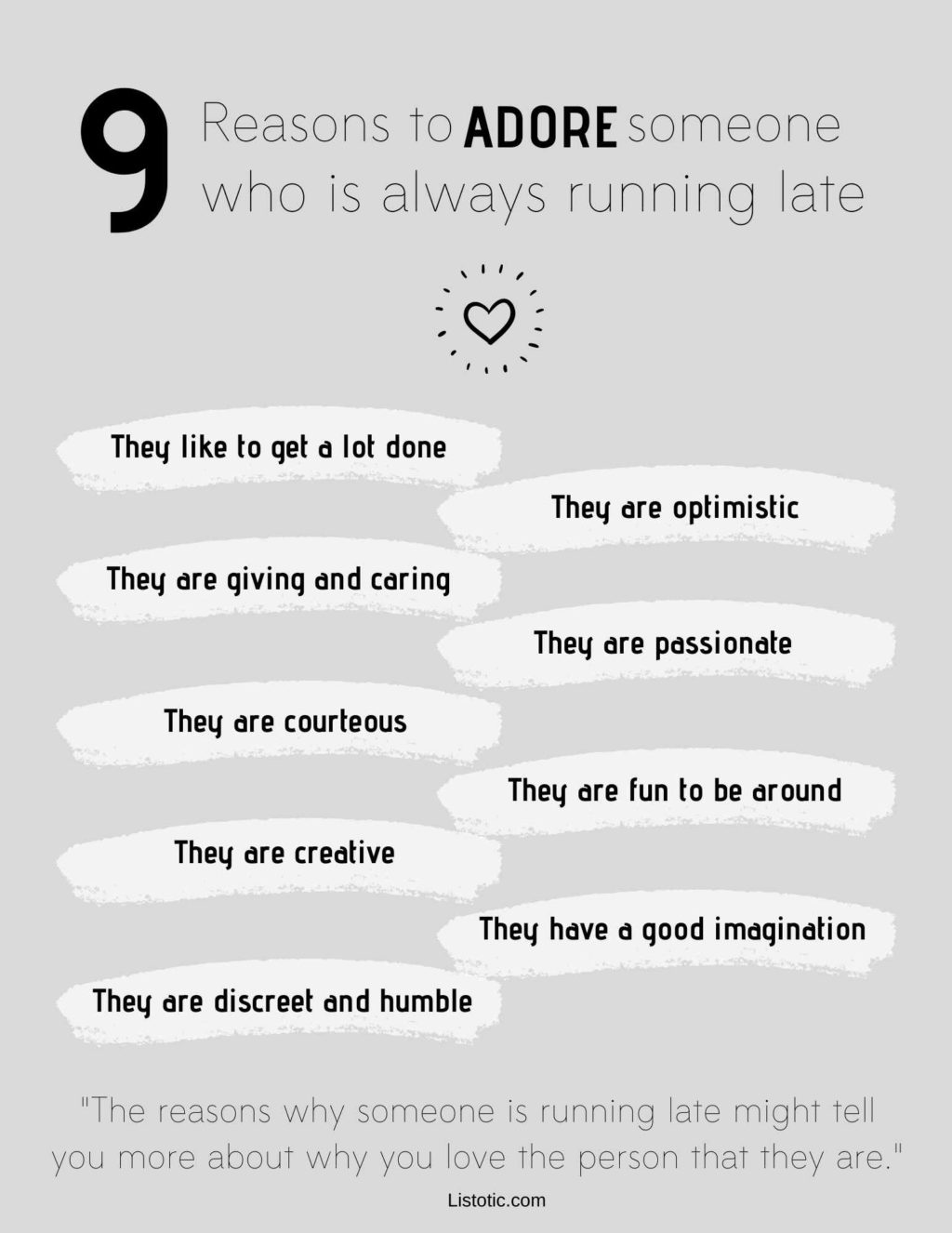 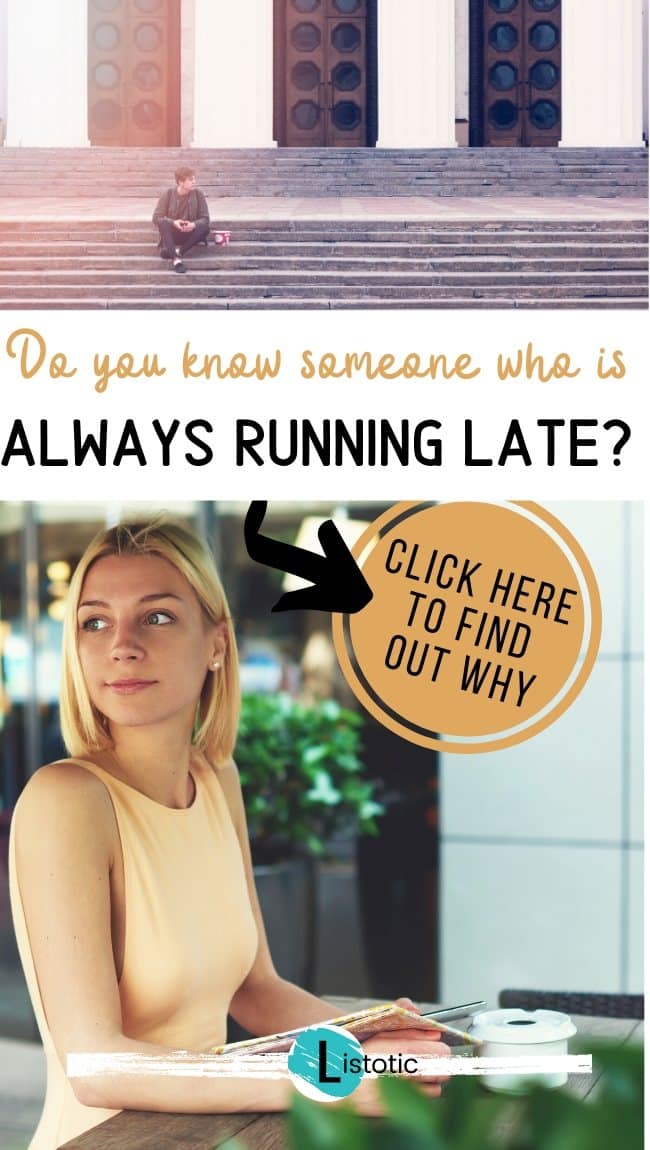